Following a short brainstorming session, our group (Shahar & Molly) converged on the idea of destructive scanning (what does that say about us?). We liked the idea of consuming the object as it's getting scanned and "rebuilt" in 3D in the computer.
We immediately thought the inkscanner was a good place to start, and after the "dissolve the object using acid" idea came off the table, we settled for taking the slices concept literally, and physically slicing the object that we would scan. Molly brought some fancy marzipans, I got a knife, and we got to work.
The process was pretty straightforward (or so we imagined it to be):
The first problem we ran into was that it was hard to cut the marzipan into thin enough slices to get a good resolution on that axis. That might be remedied by simply choosing more easily slicable objects. The other problem was that the Fluid Scanner didn't really work, and the source code did not compile either (used an older OF version). We struggled with it for a while before deciding to try something else. Molly went for AfterEffects, while I tried to write some Processing code to replicate the desired effect.
Here's the code we ended up using. 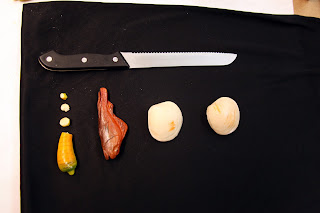 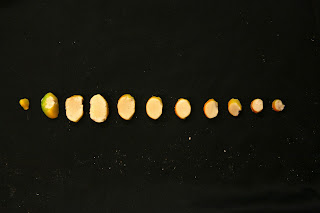 carrot from Molly Schwartz on Vimeo.


carrotae from Molly Schwartz on Vimeo.
Posted by molly at 9:28 AM